Todd Gitlin published an op-ed in the New York Times today (8/28/17) entitled "Who’s Afraid of Antifa?". As is everything he writes it's worth reading and considering.

Antifa — anti-fascist — is, as Gitlin sees it, "a particular strand of aggressive left-wing activism." It consists, in a sense, of lefty daredevils willing to put their bodies on the line against the surge of "white supremacists."

In describing the diverse lineage of antifa adherents he says: "They are aware of, or unimpressed by, the fact that when Hitler came to power, he crushed the left-wing militias. . . " [It would be nice, wouldn't it, if the Times retained enough proofreaders to change "aware of" to "unaware of" which would permit the argument to make some sense. But such proofreading is a thing of the past, even at the Times.]

Gitlin emphasizes that the impetus of antifa is originally defensive in nature; it is a push-back
against the violence of the white supremacist right.

No doubt.
But not only.

There's another way of looking at antifa, namely that it is the hard-edged component of something more general that is happening on the left, something less justifiable or uplifting, something innately censorious.

In the same issue of the Times I read that, "Memphis Theater Cancels ‘Gone With the Wind’ Screening."

Why? Because some thought the film "insensitive to a large segment of its local population.”

But GWTW is not Griffith's famously prejudiced "Birth of a Nation", is it, or Leni Riefenstahl’s odious ode to Hitler, "Triumph of the Will."

And even if it were, both the above films should be shown, if only to be debated and to serve as markers. How do we know who we are if we don't know where we were?

I'm not making the ludicrous claim that antifa had anything directly to do with the shutdown of GWTW.

I am saying, clearly as I can, that left censorship and suppression is not always a reaction to the right: it has its own awful lineage and impetus.

Posted by Harvey Blume at 6:24 PM No comments:

Back up Donald back up

Perhaps you've already heard what Hillary Clinton says, in her forthcoming book, "What Happened", about Donald Trump literally breathing down her neck during their second Presidential debate. "This is not okay, I thought. . . Two days before, the world heard him brag about groping women. Now we were on a small stage and no matter where I walked, he followed me closely, staring at me, making faces. My skin crawled."

She goes on to ask her readers, "'Well, what would you do?’ Do you stay calm, keep smiling and carry on as if he weren’t repeatedly invading your space? Or do you turn, look him in the eye and say loudly and clearly, ‘Back up, you creep. Get away from me. I know you love to intimidate women, but you can’t intimidate me, so back up.'"

But he did intimidate her. She didn't confront him. She didn't say "back up." What was she afraid of? This was being witnessed by millions. Not even the odious bully Donald Trump could have physically attacked her on such a stage. It was a safe space, as they say.

And yet she was intimidated. I think history would be different if she had surmounted her fear, and, yes,  conditioning, and had simply said, for all to hear and remember: "Back up Donald. Stop breathing down my neck."

She had been a First Lady, a Secretary of State, and, two times, a presidential candidate. She had witnessed and authorized violence. But when it came to the few words that might have worked, she lacked the personal courage.

If I'm supposed to empathize with her I can't manage it. I think less of her than I had before. Her lack of courage confirms everything I have always disliked about her.

I find it disgusting that she asks her readership to cover for her. But such is Hillary Rodham Clinton.

Posted by Harvey Blume at 6:40 PM No comments:

But Is It Art? 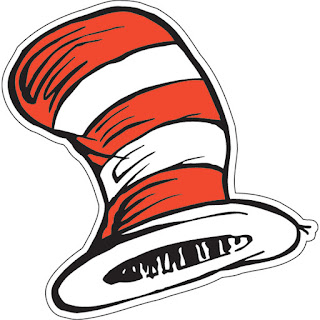 You may or may not know, for instance, that “The Cat in the Hat” was composed using just 222 different words, because [Theodor Geisel/aka Dr. Seuss] was under orders from his publisher to draw from a prescribed vocabulary for beginning readers.

Posted by Harvey Blume at 7:29 PM No comments:

Michelle Obama tells us to confront haters without drawing on the hate in our hearts. What, then, about fear and anger? Censor them too?

To my mind her view is noble but problematic. Going high while they go low is why Dukakis lost to HW Bush — Bush's scurrilous Willie Horton ads undid Dukakis, who, in his go high innocence lacked the rhetoric to counter them  —   and why John Kerry was trounced by GW Bush: Kerry was smarter, stronger, and, yes, more genuinely heroic than Bush, but accepted bad advice to pack all that in and be nice. So when GW went low Kerry went insufferably bland.

Brook Gladstone in her engaging essay "The Trouble With Reality: A Rumination On Moral Panic In Our Time",  talks about our being locked in frames of reference that seek, only to reinforce themselves, blocking any signals from the outside. Following neuroscientist David M. Eagleman, Gladstone gives this example: "In the blind and deaf world of the tick, the important signals are temperature and the odor of butyric acid. For the black ghost knifefish, it's electrical fields. For the echolocating bat, it's air-compression waves."

"The small subset of the world that an animal is able to detect is its unwelt."

Gladstone concludes by urging us to insist less exclusively on the parameters of our tick world — I do love the comparison — so as to allow for the unknowns of what, following Eagleman,  she calls the umgebung, the vast, uncharted, confusing world beyond.

But for one thing I haven't had the opportunity to mix it up with many from the adjacent tickworld. Not too many ticks of that persuasion venture into my unwelt, nor do the likes of me flock into theirs.

And how do we suppress anger and fear, a la Michelle Obama, who advises us to do so, when we feel strongly that not only are they coming for us but for our world? How then to maintain the kind philosophical calm Gladstone seems to advocate? How then to  be Socrates, who claimed he knew nothing,  when from their tickworld comes the cry that their big tick knows everything?

Gladstone sees the problem. Her opening to her book is a quote from Thomas Szasz: "The neurotic has problems, the psychotic has solutions."

She sees the problem but doesn't resolve it.

Nor am I going to pretend I can. I will say when they go low, their native habitat,  the one to which they are best suited, we have to go everywhere, go full octave, not excluding the lower registers.

If it comes down to one ant colony against another, I want mine to win.

For the sake of all ants, all ant colonies, everywhere.

Posted by Harvey Blume at 6:20 PM No comments: