What's going on? They're all turning into monsters. The monstrous side, the monstrous tide in them, is coming to the fore.

I exclude Trump. He's been running as top of the monster ticket from the start: after all, there's nothing in the Constitution that specifically prevents monsters or ghouls from running for higher office; correct me if I'm wrong but being monster is not, per se, impeachable.
Read more >
Posted by Harvey Blume at 6:37 PM No comments:

With that proviso in mind, I've been revisiting the Samson story (Judges 16). Samson is, loosely speaking, the Hercules of Hebrew scripture, incredibly strong, capable of tearing a lion apart with his bare hands and beating back the massed enemies of his people with but a jawbone.

Read more >
Posted by Harvey Blume at 6:51 PM No comments:

There are Sandernistas, not all of them young or uneducated — some, far from — who detest and fear Clinton more than they do Trump, and who have committed themselves to writing "Bernie Sanders" on their ballots when Hillary Clinton is the Democratic candidate.

Read more >
Posted by Harvey Blume at 7:25 PM No comments:

If spreading stupidity is Trump's goal, it's definitely working. Forget Zika Virus. Think Trump Virus, as it shrinks not only newbie but fully mature minds and brains.

I know a highly accomplished and intelligent Sandernista who tells me she's convinced Hillary is more militarist than Trump would ever be.

Read more >
Posted by Harvey Blume at 7:30 PM No comments:

This is a weird time politically. People who are an inch from complete agreement wind up disagreeing by miles. Were I a Freudian, I'd call it the narcissism of small differences. Since I'm not a Freudian, I'll settle for saying that politics can so easily bring out the accusative and dogmatic worst in us. Why? Because as Carl von Klutzywankputz spelled out in his famous tome, politics is just war by other means.  Politics is toddler war, war that can't yet correctly pronounce its name. And despite all the peacenik appearances, many of us prefer an anthem, a marching song, and a  battle slogan to a real idea.

Read more >
Posted by Harvey Blume at 7:27 PM No comments:

I share the reservations many Sandernistas or quasi-Sandernistas have about Hillary, but these qualms are nothing as compared to my fear and detestation of Trump.

If Hillary becomes the Democratic candidate, as seems close to if not quite inevitable at this point, I think it might be time to chill out a bit on the pessimism and, yes, defeatism.

(As NPR reported today, one reason Sanders looks good in Sanders v. Trump polls, is that Republicans have held off on targeting  Sanders; they like him going after Hillary, and want to keep that going. I think that if he were the candidate, which he won't be, the GOP will identify him with Communism. Remember Communism? Americans don't like Communism, does we? And that's just for starters. Bernie's just not the immaculate Trump killer many of us like to pretend he might be.)

So, reservations and all, I'm prepared to cheer Hillary Clinton on.

She's flawed, yes, and I'm not about to forget that. But Trump, on the other hand, is a threat to democratic life and limb. To put it another way, she might be compromised or defective but Trump is just plain WACKO.

All moaning and groaning aside, it's been a long time, if ever, since there's been a clearer choice.

This is even easier. (And, while I'm at it, HRC is far less likely to destroy genuinely liberal Great Society accomplishments LBJ brought to pass with the kind of genocidal war he kept on pursuing.)

She'll be blamed for Bill's womanizing, and for Benghazi. (She looked splendidly, even imperiously, bored during the BS of the Benghazi hearings.)

A bit of truth will undoubtedly get into an updated set of accusations but mostly it will be Whitewater all over again, what is aptly called in Yiddish GMG, gornisht mit gornisht, nothing with nothing.

Obama hadn't been around enough for them to cook up equivalent dreck about him. Well, except, for, he's not an American citizen, is he? Go Trump.

Hillary will occasion a rebirth, a crescendo of rightwing GMG.

I hope she goes negative on Trump fast. He won't release tax returns? This billionaire says without shame that he works hard to pay as little in taxes as possible? What an example to the working man/woman.

His history with women is coming to light as quasi if not criminally abusive?

He's already not on speaking terms with the Mayor of London and the Prime Minister of England?

Who cares; he does dig Putin, so that's something. And he either will or won't aid and abet South Korea and Japan in acquiring WMDs, depending on which side of the bed he wakes up on. (Melania/Melanoma do keep him down, apply all your arts but do keep him calm.)

It's good he keeps an open mind on these things, no?

And what was it he said about climate change? It's not a federal issue, it's up to the states to decide? (I made that one up, by which I mean he hasn't really said that — yet. . . that I know of.)

I've been voting in presidential elections since 1968.

Not a single one.

And yeah, I do like that a certain segment of the population might be voting with their vaginas.

She's all right enough with me.

Posted by Harvey Blume at 8:27 PM No comments:

First they came for the jugglers.

Another sweep for the clowns. 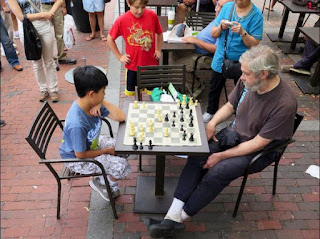 They came back for the acrobats.
Then banished the drummers.
Read more >
Posted by Harvey Blume at 5:52 PM No comments:

If nothing else, Trump affords commentators and critics the opportunity if not necessity for extravagant language. I don't often, if ever, find Andrew Sullivan worth quoting, but his concluding words about Trump (from "America Has Never Been So Ripe for Tyranny" a recent piece in nymag.com) are blustery enough to stick with me:

He [Trump] is not just another candidate to be parsed and analyzed by TV pundits in the same breath as all the others. In terms of our liberal democracy and constitutional order, Trump is an extinction-level event. It’s long past time we started treating him as such.

"Extinction-level event?" Enviable turn of phrase, I admit, but is it so? Is Trump the killer asteroid and American democracy, flawed as it is, the massive, slow-moving, out-moded thing awaiting impact?

Based on his histories of American conservatism — e.g. "The Invisible Bridge: the Fall of Nixon and the Rise of Reagan" — I take Rick Perlstein more seriously than I do Sullivan. In a recent piece for The Nation ("Is the American Party System About to Crack Up?"), Perlstein writes of Sanders:

He is running as a “revolutionary.” But governing is a team sport. If, by some miracle, Bernie Sanders entered the White House in January, he would do so naked and alone—in command of a party apparatus less prepared ideologically, institutionally, and legislatively to do great things than at any other time in its history.

This is not exactly what Sandernistas want to hear, of course, though it's inarguably correct.

"One side promises competence. The other promises the impossible. This is the Democratic Party in 2016."

Moving on to the more charged subject of Trump, Perlstein writes:

If Donald Trump loses the presidency, we’ll still be left with those millions of followers—many of them violent—trained by Trump to believe that their American birthright has been stolen from them once more. The only thing that will stand in their way is the strength of our constitutional system. One must hope it proves very strong indeed. The alternative is a sort of realignment that none of us want.

I beg to differ with Sullivan. I don't think America is as ripe for tyranny as he says. The United States is not suffering anything like the shattering of a Great Depression. Nor have we lost the sort of major war that throws all values into doubt.

I think American democracy, as per the Constitution, less absolute and more flexible than the above regimes and traditions: to put it another way, it's more secular.

Both Sullivan and Perlstein underline new media as one of the reasons traditional political discourse has given way to irruptive forms and figures. Who needs violence in the streets when violence online and in social media suffice?

That's worth coming back to. Suggestions welcome.
Posted by Harvey Blume at 8:32 PM No comments:

Camille Paglia, remember her? Salon.com does and worshipfully publishes her increasingly incoherent outbursts. I won't pretend I got through the whole of her latest, but I did find and can't resist sharing a few choice bits.
Read more >
Posted by Harvey Blume at 7:33 PM No comments:

The question often arises in these discussions about how to motivate millennials and others to think of voting for Hillary as not just a negative — as in hold your nose and vote against Trump —  but also a positive, a vote for something and someone worth supporting.

How about the glass half empty/glass half full analogy?

Half empty is everything about Clinton we have a right to distrust. Throw in her vote for the invasion of Iraq, her all-too-robust neo-militarism, her shady connections to Big $$$, and the emptiness is vast.

Read more >
Posted by Harvey Blume at 7:02 PM No comments: