Rabbi Ben-Zion Gold, "The Life of Jews in Poland before the Holocaust: A Memoir"

First appeared in the Jerusalem Report, 2007 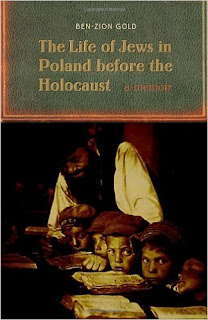 It took Rabbi Ben-Zion Gold twenty years to complete his spare, powerful memoir, which originated as a message to his daughters, both of them born in the United States after World War II. Gold, born in Poland in 1923, was the only member of his family to survive the concentration camps, and hoped his book would help acquaint his children "with the lives of their paternal grandparents, aunts, uncles, and cousins, whom they had never met because they were murdered by the Nazis." In the course of writing, Gold decided to direct the book toward a wider readership, but the crisp, plainspoken style of a letter to kin serves him well throughout.


There's no recourse to rhetoric in the book, and but one argument, albeit an overriding one. Gold's concern is that there is an "imbalance in the way we remember the Jews of Europe. He writes: "The Holocaust was undoubtedly the greatest tragedy in Jewish history, but it would be a mistake to treat it as a heritage." The heritage of Jews, he asserts, "is the way the Jews of Europe lived and what they created before the Holocaust. Memories of the "cultural-religious heritage" he grew up with gave him "the courage to raise a family in a world that I had experienced as deranged by the blood and agonies of our people."

The very structure of the book puts Jewish life at its center, and pushes the Holocaust to the side. There are 16 chapters devoted to events before 1940, when Gold was 17, and the Nazis occupied Radom, the town he grew up in south of Warsaw. There is a chapter about his escape from the Germans in the final days of the war. There are two chapters about his life in the United States -- his struggle to redefine a connection to Judaism, and his decision to attend the conservative Jewish Theological Seminary in New York City and become a rabbi. There is, pointedly, not a single chapter devoted to the concentration camps.

Gold's tale unfolds through anecdotes and imagery, with historical context introduced where needed. Time after time Gold is stopped in his tracks, transfixed by memory. Elocutions like: "That image . . . has remained with me,"and, "After sixty years I can still see him," occur frequently. Gold grew up in an Orthodox milieu that was ceasing to be the norm for Polish Jews. In the 1920s and 1930s, he writes, there were "about three and a half million Jews in Poland, but less than a third of them were religious. Most of his peers, he says, "abandoned religion for political or practical solutions to the dilemmas of Jewish existence." But the sounds and images that catch Gold up in this book arise for the most part from religious life.

Gold recalls, for example, that on Shavuot in 1939 he visited a hasidic rebbe famed for composing nigunim (prayerful wordless melodies). When the rebbe was ready to introduce a new nigun, he "tapped his silver snuffbox with his finger, signaling his followers to be silent." The new nigun on that occasion was complex, and when the Hasidim joined in to sing it, "The effect was spellbinding." When the song ended, Gold felt as though he had "awakened from a marvelous dream." Gold was similarly affected by an evening at the Lublin Yeshiva, when, after hearing a lecture on the Talmud, the students "returned to their studies, each of them chanting the [Talmudic] text aloud." As their chants emerged through the school's open windows, the head of the yeshiva turned to Gold, "and with satisfaction, said, 'Listen to the sound of Torah.'"

Poignant as such memories may be individually, they attest cumulatively to the wide range of religious experiences Polish Judaism in full flower afforded an ardent, intelligent seeker like young Gold. His memoir should be appreciated as, among other things, the record of a spiritual quest, though it may be difficult for a contemporary reader to recognize it as such, since it lacks many of the features we're used to finding in the genre -- drugs, psycho-sexual transgressions, and encounters with dominating cum deranged cult leaders. One remarkable thing about the religious world Gold recalls is its coherence. However passionate or eccentric religious devotions might be, they did not aim to violate or damage the communal life that hosted them.

And those devotions could be eccentric, even alarming, for Gold, especially in their innovative form among the Musarniks. Founded in the mid 19th-century, the Musar movement, he writes, was "dedicated to deepening moral sensitivity in religious practice and in personal relations. Musarniks let themselves be guided by the slogan: "A menstch darf arbeten of zich" ("A person has to work on himself.") To overcome laziness, for example, they might rise before dawn in winter and run for miles. To desensitize themselves to public opinion, they would do "ridiculous things like go to an apothecary with a bucket to purchase ten cents worth of iodine." Without benefit of drugs, Musarniks could enter into what we should not hesitate to call altered states. One of their techniques was to chant "over and over again, moral phrases from the biblical or rabbinical texts . . . until they would break down into weeping." When Gold first heard their "heart-rending wailing," he needed to be persuaded no one had just died. He concluded that their "radical behavior [was] heroic," but that he, personally, lacked "the courage to do what they did."

My first, indelible, impression of Rabbi Gold was that he in no way lacked courage. I am thinking back to a Yom Kippur service at Harvard Hillel in 1988. (He directed Harvard Hillel from 1958 until his retirement in 1990, and is now Director Emeritus.) I had planned to leave when the morning prayers were concluded, but was rooted to the spot when Rabbi Gold began his sermon by saying sharply: "Yitzhak Shamir tells American Jews 'Shut up'. Here's why we shouldn't."

Gold was responding to the then-Israeli prime minister's Rosh Hashanah message to American Jews, telling them, in effect, that if they thought Israel was too harsh in dealing with the Intifada, then in its second year, they should keep their opinions to themselves. Criticism of Israeli actions undermined Israel, according to Shamir; disagreement about Israeli policies encouraged its enemies. Arguments like these had, in my experience, by and large sufficed to brow-beat American Jews into silence, which is why it was striking to hear Rabbi Gold challenge them from the Yom Kippur podium.

Gold has come back to the subject matter of that sermon several times in writings and Hillel talks. In one piece (for The Boston Review 10/11/02), he wrote that, "throughout my conscious life I have been, as I now am, devoted to Israel." One source of Gold's Zionism was his father. The elder Gold, though an observant Jew, guided in daily life by his study of the Talmud -- he'd been "literally addicted to studying, Gold says in the memoir -- had concluded "that the future of Jews in Poland was bleak," and planned to settle his family in Palestine.

As for Gold himself, when he emerged from the camps to learn that all other members of his family had been killed, he "accepted the opportunity of a safe life in America despite a "preference for Israel." He adds that while he still feels "more at home in Israel, he can no longer be counted on to give "unquestioning support to its policies." The building of West Bank settlements, and the 1982 incursion into Lebanon have made him a critic.

And Gold does not espouse the view that support for Israel must come at the expense of respect for the Diaspora. "The Diaspora," he wrote, "has been a creative form of independent communal life in every part of the world." American Jews, in particular, he argued, "as the largest Diaspora community, have to discover their own focus, independent from Israel." They must resist the notion that they are no more than "failed Zionists," whose role it is to "to support, submissively and uncritically, the policies of the Israeli government."

When I ran into Rabbi Gold in Cambridge some time after his 1988 sermon, I said I thought he'd been courageous to challenge Shamir. He looked at me quizzically, then smiled. "Courageous?" he said. "I don't know about 'courageous'. What could they do to me?"

When I visited him in his Cambridge house recently to talk about his memoir, I alluded to the sermon once more, noting that at the time some people had muttered that on Yom Kippur a rabbi should stick to spiritual things, not bring up politics. Gold chuckled, and in a much softer voice than I heard in 1988 said, "Politics is spiritual, too. And you don't cut your cloth accordingly to this guy's or that guy's opinion. You think what you have to say and go ahead and say it."

I told him how surprised I'd been to find the theme of spiritual quest clearly articulated in his memoir. At first, he wasn't sure what I meant. I explained that I was alluding to the sort of thing we tend to associate with, say, a journey to the East, with gurus and so on. But here it was full-blown in his memoir, in the context of traditional Judaism.

"What you're essentially saying to me now," he replied in a near whisper, "is that you're learning about the variety of Jewish life."

Email ThisBlogThis!Share to TwitterShare to FacebookShare to Pinterest
Labels: "The Life of Jews in Poland before the Holocaust", Rabbi Gold