I've said it before and will say it again: Cambridge is going. The new version will not be an interesting landing place for new immigrants and their culture, which might revitalize the city. That can and does happen elsewhere. But it's not how Cambridge changes.

It will be reconstructed by landlords looking for more rent (what was Carberry's, then Lyndells, for example, is being held hostage until the owners of that space get whatever astronomic return they are holding out for, from, perhaps, a really friendly place, such as a bank); by boutique merchants looking for the obvious: and, most of all, it seems, by universities seeking more space, at the expense of what remains of any vestiges of community space.

What surprises me more than the transformation itself is the lack of response to it. That proves the Cambridge I once identified with is already long-gone.

The latest insult is that Harvard, which is repossessing the Au Bon Pain in Holyoke Center, will be cutting down the trees that provided shelter in that venue — yes, cutting down the trees — and, astonishingly, demolishing the chess tables that, even if you didn't play, provided a spot of liveliness in the mall that is now Harvard Sq. for tourists and for natives.

Harvard Sq. was once a notable place for street artists and musicians. That brilliant moment has been regulated out of existence. It seems Harvard Square reduction to dead zone will soon be complete. 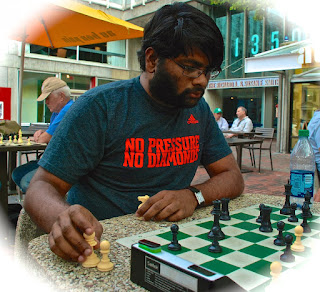 And, for sure, expensive.
. . .
Drove by Holyoke Center last night. Yes, Harvard has neatly denuded the place of trees, uprooting and removing them. Where are all the pigeons who roosted there to do their business going do it now? Is there a way to direct them to the proper offices of the Harvard administration?

The stone chess tables that have been there since before the Easter Island megaliths remain, but temporarily. Harvard has declared them threatening and dangerous. Corporate lying is an art form of its own. I'd love to compose a book of corporate lies, volume of hilarious anti-truths.

But back to business at hand: anybody ever hear of a stone chess table in Holyoke Center hurting anybody?

There is good news, though. In a heated discussion among Harvard trustees, the idea of using Agent Orange on the trees of Holyoke Center was shot down. Nor did the idea of using napalm on chess players and street musicians get much support.

Good to get this done at tail end of winter, don't you think? Before chess players and street musicians could really come out of hibernation.