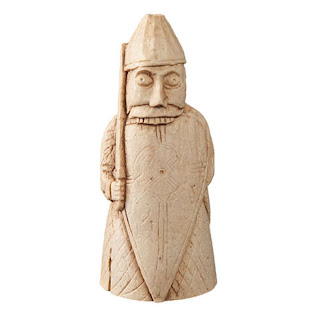 This guy is known in Icelandic lore as a Berzerker, a warrior so fierce, dauntless, kick-ass, he chomps his own shield. Today, there are heavy metal bands named after him. Back then, he could go toe-to-tusk with a walrus, and if you think walruses are quaint or funny think again; their hides were close to impenetrable, and they were known to kill whales.

The Berzerker in his prime was the most powerful piece on the board, a very walrus of a piece.

The queen had been born but was new to the fray and far from claiming all her powers. At first, she looks a bit confused on the battlefield. Soon she becomes the warrior-in-chief, a combo of a rook, a bishop, and a pawn. She assimilates the mad rage of the Berserker, assuaging it with subtle diagonal moves. Pawns, all eight of them, devote their lives to queening, to becoming a queen.

The king, she protects him. He only displays his limited mettle in battle when she is gone. Then he steps out, devoting much of his activity to getting her — a younger version — back, defending a pawn until it reaches that sweet spot where the lowliest piece on the board is transformed into a mighty queen.