I'm going a Seder tomorrow and in advance sent a few thoughts around to the others attending. 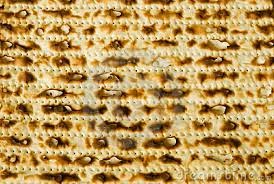 Passover is, in a way, the most Jewish of all holidays. It the story of how the Hebrews came together as a people in their escape from slavery and tyranny in Egypt. The events told in Exodus made the Hebrews a nation and promised them further nationhood.

But Pesach is also the most universal of Jewish holidays. It focuses on questions of freedom and bondage which all nations, all people, including individual people, have to contend with in one way or another. That's why the story told in Exodus has been adapted for so many purposes. When Martin Luther King and other leaders of the Civil Rights movement said, "Let my people go," they were using the words Moses used in his confrontations with Pharaoh. And the universality of the holiday is why non-Jews are invited to participate fully in it.

It would be wrong of me to depict the story of Exodus as a purely national struggle, Hebrews v. Egyptians, Moses v. Pharaoh. There's a lot of religion in it. God -- often referred to by Jews as HaShem -- plays a key role. HaShem appoints Moses, who initially hates the whole idea, to be his spokesman. HaShem delivers the Hebrews from Mitzrayim (Hebrew for Egypt). There's plenty of Hashem in the story. And the Haggadah by no means leaves Hashem out.

But it is interesting how little actual davenning -- praying -- there is in the Seder. Most other Jewish holidays are synagogue events, centered around prayer. Not Pesach. Pesach centers on the home, family, friends, food, singing, talk.

Yes, it's about eating certain foods and saying certain things in a certain order. ("Seder" means order in Hebrew). It's about drinking (at least!) four cups of wine. It's about hiding that big matzah known as the Afikoman (a Greek word, meaning dessert) for kids to find, if they can. It's about leaving the door open for Elijah the Prophet, should he drop in for a glass of wine.

But the core of the Seder is discussion -- celebrating, pondering, questioning this tale of freedom versus slavery.

In that vein, let me suggest two questions to consider in advance for purposes of discussion:

Is the difference always so clear, so absolute?

We all can say something about being in bondage to others, forced to do what we don't want to do, hate doing and shouldn't have to do. The story of Exodus has a brief but wonderful description of the terrible working conditions the Hebrews had to endure under Pharaoh, when, angered by Moses, he sped up the brick making assembly line and wouldn't even provide the necessary materials for the Hebrews do their jobs.

But what about things in our very selves we are aware of, don't like and can't get free of? Is that no less a kind of bondage?

-- Second question: In the story, God repeatedly hardens the heart of Pharaoh. This is a refrain. The Egyptians suffer under one or another of the ten plagues that HaShem inflicts up them. Pharaoh is about to relent, to let the Hebrews go. What does HaShem do? He again hardens the heart of Pharaoh, and Pharaoh again refuses to let the Hebrews go, until that last and most deadly plague, the death of the first born. That plague, HaShem can't bear to inflict directly. No, he assigns it to his assistant in such things, the Malach Ha-mavet, the Angel of Death

And then, even then, Pharaoh sends his army to get the Hebrews back. He can't let go of his power.

But this is a disturbing aspect of the story. Why does Hashem do this? Does he want to show off, demonstrating time and again that no matter how hard Pharaoh's heart has become he, HaShem, is stronger and can break it?

Or is the story about how freedom and slavery have nothing in common; no mincing around, you have to be on one side or the other, part of the problem or part of the solution?

Let me end on a personal note: I, personally, don't think Hebrews were ever slaves in Egypt. That puts me in accord with the current consensus among scholars from all sorts of disciplines. But that doesn't make the story any less meaningful to me. In a way, it makes it more extraordinary. Hebrew writers, though never slaves in Egypt, composed a story about freedom and slavery that is inexhaustible.

The Haggadah tells the story, in its way, but I recommend that everyone read Exodus in whatever Bible they have. That's my practice. I find it rewarding, every time.

Enjoy the Seder, if you're hosting or going to one.

(This is not to say you must have a Seder. I've been Seder-less many times for one reason or another but I'm pleased that's not the case this Pesach.)
Posted by Harvey Blume at 6:02 PM