Significant changes in the world of the art museum can trigger roiling controversy or transpire in problematic quiet.

In New York City, the imminent demolition of the American Folk Art Museum has triggered an uproar likely to leave echoes and scars. In 2001, the AFAM moved from its small, storefront quarters on Broadway to a building designed by Tod Williams and Billie Stein. AFAM houses the main collection of the works of Henry Darger, who, though he could never have suspected it, having died unknown to the art world, was foundational for the genre to be known as outsider art. The AFAM always had some Darger on display and regularly mounted exhibits such as "Gilded Lions and Jeweled Horses: The Synagogue to the Carousel", unlikely to be seen elsewhere. 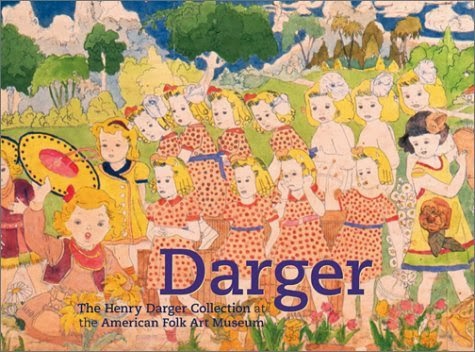 The building was an aesthetic achievement in its own right. New Yorker writer Peter Schjeldahl called it "a pleasure machine”, with a "jazz-like" structure. Architecture critic Paul Goldberger thought its, " brooding, somber façade. . . made of folded planes of hammered bronze, combines monumental dignity with the image of delicate handcrafting." I always looked forward to visiting AFAM, mot only for the contents of the main galleries but also for the nooks and crannies, including the knobby stone-worked stairwell alcoves that doubled as mini-galleries. The building seemed perfectly suited to the idiosyncratic art it showcased. It was hard to imagine its existence just west of Museum Mile could be so fleeting.

But AFAM was saddled with two major problems from the start. The first was debt, an inability to repay loans taken to fund construction. The second was that its next door neighbor was none other than that ever-expanding dynamo, the Museum of Modern Art.

When MoMA purchased the AFAM building in 2009, there was hope that though it would no longer be dedicated to outsider and folk art, all or part of the structure would be retained and integrated into MoMA's manifest destiny. But MoMA, a place of cavernous cubes and relentless right angles, had no use for any aspect of its odd, angular neighbor except, that is, for  the ground it stood on.

There is irony in the fact it fell to the firm of Diller Scofidio + Renfro (DS+R), innovative in its own right (responsible for the Boston ICA, Manhattan's High Line park and the remodeling of Lincoln Center) to affirm and deliver the verdict. In early January, Elizabeth Diller declared that after due diligence, her firm had found that the effort to at least preserve the building's distinctive bronze facade was, well, “Facadism."

Critics and the public derided MoMA's decision and DS+R's role in it. Peter Schjeldahl wrote: "That MoMA, with the first and largest architecture and design collections in the world, wants to destroy its notable neighbor has enraged architects, critics and preservationists." As for DS+R, Pulitzer Prize winning architecture critic Martin Filler concluded the firm had undergone "a dire transformation from vanguard mavericks to corporate apparatchiks." Filler scorned as disingenuous a proposal MoMA made to sweeten the deal by opening its sculpture garden to the public, free of charge. "Such populist largesse," he wrote, "seems ironic coming from an institution that in 2004 raised its entry fee to a then-unprecedented $20—which set off a copycat nationwide rise in museum ticket prices—and increased the tariff to $25 in 201l."

MoMA's decision prompted Paul Goldberger to recall a story he, "once heard of a woman in Dallas who told her art dealer that she was sorry, but she couldn’t keep that Matisse after all because her decorator had decided it was the wrong blue." For Goldberger, "the idea that a building of this quality would be torn down, and that the agent of its destruction would be another cultural institution, is not easy to fathom."

The Daily News captured the prevailing view when it wrote: "The Museum of Modern Art has told the little museum next door to 'folk off.'"

The change occurring in the Boston area museum world would seem, by and large, to bear little comparison to the controversy in Manhattan. The local changes pertain to Harvard, which owns one of the great art collections in the area, and aspires to make that fact better known.

The Harvard Art Museums are approaching the completion of a major renovation. With Renzo Piano, best known in the area for the redesign of the Gardner Museum, as architect, advance notice has been uniformly positive. The benefits of the new HAM appear to be many and inarguable. They range from introducing essential climate controls to old buildings, like the Fogg — the absence of which prompted HAM director Thomas W. Lentz to remark “we would never lend to ourselves" —  to furthering HAM's utility as a teaching institution, to the sort of opening to a broader public that that is unlikely to be deemed disingenuous.

The new HAM will be difficult for the public to ignore. A piece in The Harvard Crimson reported: "The museum’s new structure, with large windows, galleries exposed to the street, and a café and shop open to non-museum visitors, seems dedicated to catching the eyes of passers by. 'All of a sudden, it’s screaming, ‘This is an art museum,' [HAM director Thomas] Lentz says of the new design." Daron J. Manoogian, director of communications, adds that the reopening of HAM will be announced by "a publicity campaign unmatched by any previous efforts," one that will to  include, "print ads, social media, transportation advertising, and even radio."

Speaking as a relocated New Yorker and Cambridge resident, I can't but look forward. A world class museum down the road, one with splendid collections of Medieval, Renaissance and Modern Art, augmented, recently, by a major gift of  Outsider Art? Sure. What's not to like? There is one thing, namely that during a 14 month interim, HAM has gone completely dark. The museums, all of the Harvard Museums, shut down in June, 2013 and are not scheduled to reopen until November, 2014.  Not even the Sackler, which showcased a portion of Harvard's art during an earlier phase reconstruction remains open.

Was such a shutdown necessary? Was there no alternative to HAM going dark? Harvard, after all, does not lack for real estate in Cambridge and beyond. Couldn't one of its properties have been utilized to display a some of Harvard's holding in the interim? This, after all, was the approach taken by MoMA during a major reconstruction, when some of its art was shifted to a public venue in Long Island City, Queens, where it could be enjoyed in a folksier atmosphere than the one that prevails at MoMA in Manhattan.

I contacted Martin Filler for his opinion of the HAM shutdown. He responded: "I am very much opposed to art institutions going totally 'dark' during lengthy building projects." He added that "problems with liability, conservation, and other practical matters encourage museums to shut down entirely during major construction projects, but it’s the public’s great loss and I will watch the Harvard scheme with interest."

I put these concerns to Harvard's Daron J. Manoogian, who responded much as Martin Filler might have guessed: "Our renovation and expansion project is immensely complex, and there have been no easy solutions to how we approached the multiple challenges facing us. Our top priority is, of course, the safety and care of our collections. " When I asked if the public had been brought into the decision-making process, he said Harvard had "worked very closely with the Cambridge Historic Commission," had met with the Mid-Cambridge Neighborhood Association and had participated in "forums [that] welcomed public comment."
Rendering of the renovated Harvard Art Museum

But when I spoke with Charles Sullivan of the Cambridge Historic Commission, he told me his group had, "no input about keeping any of it open," and that he did not know the Sackler, too, was now closed to the public. And when I asked Joan Pickett, the Presiding Officer of the Mid-Cambridge Neighborhood Association, if her group had been consulted, she replied, "I am not sure consulted is the right word... the MCNA was informed about the overall museum project plans including the tightly choreographed process of getting some of the collection ready to move into the new building."

In the end, the most peculiar thing about the HAM shutdown is how little attention has been paid and how little disturbance it has caused. Maybe the difference between the HAM going dark and the demolition of the AFAM is as much a matter of urban culture as it is of art and aesthetics. It is hard to imagine something on the order of the Harvard shutdown going unremarked had it occurred in the environs of W. 53 St.