Reading a New Translation of the Iliad

Reading a new translation of the Iliad — Robert B. Powell's. I'm not going to compare it to previous translations, not daring to presume. But it is really something to be reading that poem again. 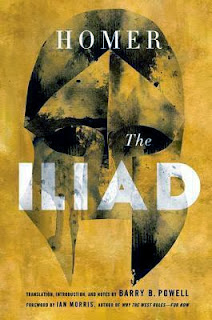 The gods are puppet masters — that's obvious right off — but in violent disagreement about what we, their vassal puppets, should do on the world stage they set.


It thrills these deities no end to send us into shattering combat.

Do they envy us our mortal stakes? Does it provide the sort of frisson they, mired in glorious immortality, cannot enjoy except vicariously?

A footnote: Powell, the translator and a renowned classicist, is especially noted for promulgating the theory that the Greek alphabet was designed precisely in order to capture epic poetry, provide some approximation of its sounds.

It shaped itself around the Homeric poems, as chanted and sung by the Greek singers of the age (circa 800 BCE).

Other writing systems came about — such is the consensus — to record transactions, accounts receivable, and the like. Text is brought about by business.

The Greek alphabet, though, as Powell has it, came equipped with vowels — absent from contemporaneous writing systems, including Hebrew — in order to accommodate Homer and others of his ilk.

What a lovely and romantic idea.

No real proof of course, none to be had, and much disagreement among the classicists.

Be that as it may, it would have been nice if Powell, so keen about the evolution of Greek text, might have stopped in on, paid the least attention to, what was happening with those roughly contemporaneous Hebrew texts.

The Hebrew texts I allude to don't highlight an Achilles; they do a David.

I don't know how one cannot at least but compare and contrast these different uses and expressions of the alphabet.

I don't know how one can write well about the one without alluding to the other.