yes, netanyahu has no right to be slipping his ongoing erosion of the very possibility of a two-state solution under the radar, which he's doing in hebron & elsewhere. he's expecting the palestinians to come to the table to talk about a state while he eats up the very ground of such a state.

Breaking Bad ends, Walter poisons somebody in Prague with ricin (he's been itching to use ricin since Season One), mows down the white power militia by remote control automatic fire, gets shot, saves Jesse, drops dead, and, right after a commercial break, there are the writer, actors, and errant if not completely pointless characters, taking it all apart in front of the camera, or, more precisely glad-handing each other about how swell it all was, and what fine things they are sure it did for their careers.

Makes me think that right after, say, Othello opened, Will and the cast sit down to publicly jaw about the "experience" of making it.
Read more >
Posted by Harvey Blume at 6:51 PM No comments:

The "Breaking Bad" finale is tonight, and  I admit I have lately become addicted, cramming myself with episode after episode.

But has it been sufficiently noted, though it couldn't be more obvious, that this whole five season cable extravaganza is predicated on the issue of HEALTH CARE?

Read more >
Posted by Harvey Blume at 6:54 PM No comments: 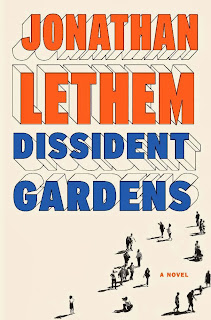 The word is that that Jonathan Lethem's new novel shows that he's outgrown the urge, manifest in The fortress of Solitude (2003), among his other fictions, to meld realism with Marvel Comic fabulism. It's true there's no one in Dissident Gardens quite like Dylan Ebdus and Mingus Rude, characters who, in The fortress of Solitude, can fly, or, if in lucky possession of a certain ring, become invisible. Still the fabulous is very much in evidence in Dissident Gardens, albeit in non-comic book form.
Read more >
Posted by Harvey Blume at 7:23 PM No comments:

I return again, to the roots of the Alawites, Bashar al-Assad's base of support. The following is from Moshe Maʻoz's, "Asad : The Sphinx of Damascus : A Political Biography" (1988) one of the most cited texts on the subject, and quite readable.

Maʻoz is Israeli. He fully opposes Assad, to be sure, but has no wish to demean him. On the contrary, Ma'oz takes pains to portray Hafez al-Assad, father of Syria's current leader, as a brutally and uniquely effective nation-builder, and a formidable adversary.
Read more >
Posted by Harvey Blume at 7:04 PM No comments:

So what's the upshot now, re Syria, acknowledging as one must that the story mutates all the time.

The upshot for now is that Assad wins, hands down.

For now, he comes out ahead.

OK, no chemical weapons for Bashar al-Assad. But there is no one to unseat him. He will stay on top. Russia will compensate him for whatever he loses in the way of chemical weaponry, as will, of course, as once and ever, Iran.
Read more >
Posted by Harvey Blume at 11:58 PM 2 comments:

for the first time it seems that the prolonged comedy of errors -- accent on prolonged -- featuring obama, kerry, and a cast of characters otherwise known as the congress, may produce something sane: russia has asked assad to turn over chemical weapons, in exchange for no attack by the u.s.. if i heard it right, assad is considering it.
Read more >
Posted by Harvey Blume at 2:01 PM No comments:

A letter to a friend re intervention in Syria:

It's not that my opinion on this remains fixed — no, it swivels & cycles — but it does tend often enough to come back to this: Americans are not for intervention in Syria; Congress will likely be divided about it; we're not leading an international coalition (NATO is not with us, not even England); we weirdly refuse to make the requisite gestures toward the U.N., genuflections though they might prove to be be; we support the opponents to Assad no more than we support him.

Yet Obama, who has tied himself in grotesque knots about this, will likely go ahead with military action.

I only hope it doesn't make things worse, much worse, than they are.

The odds are slim — though, admittedly, nonzero — that our intervention will make anything better.

Maybe I should just ask you, my friend, who support intervention, to say what good you hope solo American, not to say solo Obama, intervention will do.

Go on record about why you're for it. I've said why, despite deep doubts, and an admission that it's by now almost a done deal, I remain opposed.

History, it's bunk, to be sure. Still, Bush bled blood & treasure in a phony cause. Hence there's precious little of either remaining for the kind of commitment Syria entails and might have commanded. History stops being bunk when it comes to Syria. Syria reminds us of recent foreign policy debacles.

Whatever we do, after the Cruise missiles strike, Assad & the Syrian opposition, driven by Islamists, will go on slaughtering each other, until there won't be much left of the construct of Syria as we know it..

Sarah Palin has tweeted: Let Allah take care of it.

Tells you far gone I am that I almost —"almost" — like that.

I do like this, from Tom Cole (Republican representative, Oklahoma),
http://www.google.com/search?client=safari&rls=en&q=http://www.nytimes.com/2013/09/07/us/politics/house-republicans-say-constituents-are-strongly-opposed-to-a-syria-strike.html%3Fpagewanted=all&ie=UTF-8&oe=UTF-8

“It’s a civil war, it’s a proxy war between regional powers, and it’s a religious war,” Mr. Cole said in an interview. “Is there any direct security threat to the United States here? No. There’s really not.”

Too often Americans don't bother to analyze what kind of war it is we're about to step into. We just step. We are — or were — that powerful.

“Is there any direct security threat to the United States here?", Tom Cole asked. "There’s really not.”

Foucault said knowledge is power. Maybe not. Maybe there is more knowledge due to new media than even a declining sole & somewhat exhausted superpower can do much about.

Posted by Harvey Blume at 7:19 PM No comments:

boots on the ground

nobody wants no boots on the ground

whats exactly wrong
with dropping boots on the ground

good boots
the best
all sizes
many styles

are we low on boots?

no troops
who said anything about troops

Posted by Harvey Blume at 8:30 PM No comments: