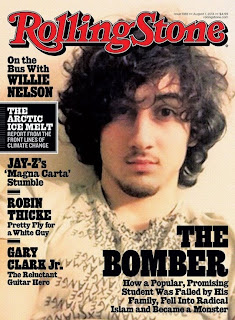 While edging along in traffic today, I left the FM dial for a bit -- some NPR segment about mortgages, I think, just the thing for this  heatwave -- and tried the AM dial. I wound up listening to Howie Carr. It was fun for a while, then, scary and outrageous.


I have to wonder if the ignorance that is his stock-in-trade comes to Carr naturally, a sort of gift, a kind of savantism in reverse, or does Carr have to study for it. (It must take some kind of smarts to be that dumb. Or maybe he just lies.)


The subject came around to the picture of Dzhokhar Tsarnaev on the cover of the new Rolling Stone (8/1/13).

Why was Dzhokhar on the cover?

Because he's is a kind of rock star to leftists, of course.

Because leftists *love* what Dzhokhar and his terrorist brother did, even though they won't say it out loud much. (Carr doesn't bother defaming liberals; he's out for leftists.)

Because leftists think Dzhokhar is cute, and dream about getting into a prison bathroom with him. (Rolling Stone publisher Jan Wenner is gay; *that's* why Dzhokhar is on the cover.)

Why did this spoiled kid hate America so much? He had it great here. He had a free pass to Harvard if he wanted it; every Muslim kid who graduates from high school in Cambridge gets into Harvard.

Had Howie Carr or any of his call-in buddies troubled to read the Rolling Stone profile of Dzhokhar Tsarnaev?

Of course not! They wouldn't sully themselves. They do, however, chew their carpets in support of the boycott of Rolling Stone underway at some Boston venues.

The kind of ignorance that is Howie Carr's specialty *can* be funny, no doubt about. It is spared ever being as dry as an NPR segment on mortgages.

But I forgot the part about how angry this radio jock is. Ignorant and angry: tune in some time to Carr or his kin and get the full jolt.

Soon as I got home, I downloaded the Rolling Stone profile of Dzhokhar Tsarnaev. It's at:

I found it informative.