First appeared in the Boston Globe

THE CURRENT DIVERGENCE of opinion about African-American artist Kara Walker dates back at least to 1997, when, at the age of 28, she won a MacArthur "genius" award for work with what she calls the "second-class" medium of silhouettes, a medium that in the 19th century was reserved primarily for women and children. Some compare Walker's silhouettes (and, more recently, gouaches and video) to Goya--others refer to Uncle Tom. Cultural conservatives scorn her as just the sort of politically correct, aesthetically negligible poseur the art market loves. 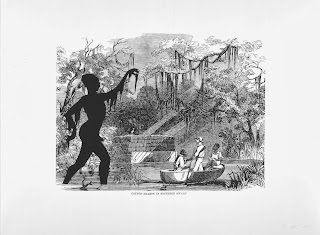 There's certainly enough variation on themes of race, rape, and violence in her silhouettes--one, called "Middle Passage," shows a slave sodomized by a slave ship--to justify all kinds of response. To further complicate matters, there's Walker's unfailing elegance. As soon as you give up the peculiar struggle to derive literal meanings from her images and let yourself respond to them visually, you feel their grace and symmetry, and wonder how and why atrocity can be made so easy on the eye.

Walker grew up in the multicultural milieu of Stockton, Calif., but moved to Atlanta as a teen where she felt herself "being thrust into [the] history" of race, and resolved to be a "bearer of some truth" about it.

Walker is tall, relaxed, and articulate, as I found when we got together at the Metropolitan Museum of Art to talk about her current show, "After the Deluge" (through July 30). Taking up themes related to Hurricane Katrina, the show juxtaposes her work with pieces she picked from the museum's collection.

Walker is so soft-spoken I worried that my tape recorder would miss her chuckles--analog to the sly humor of her work--and the nuances of her commentary as we strolled the gallery.

We focused, for a while, on a text piece she did when she felt that her images were becoming "too easily digestible," too readily "absorbed into the American metabolism." The text, typed on note cards, expresses rage--then rage against the fact of rage. It rants about whites, then just as energetically about being antiwhite, before concluding with the line: "I forget what I was saying." Walker said the piece "swallowed itself" before resolving into something "unfailingly polite."

But unfailing civility didn't stop her from saying she just "might strangle" me if I was gearing up to ask one of the questions that most annoy her: why most of her imagery pertains to slavery, rather the present. Warily, I asked it.
. . .

IDEAS: But do you work with images that are obviously today's images?

WALKER: Why ask? I don't think of these works as living in the past. They're responding to right now. I haven't felt the need to hip-hopify anything.

Look at this piece at the far end, "Entrance to the Underground Railroad" [a gouache depicting what could be a smoldering entrance to the underworld]. How is this not up to date?

IDEAS: You've said Americans have "a fear of what happens when [racism] is overcome." It's an amazing suggestion that we cling to racism, that we'd miss it.

WALKER: It's informed so much of American culture, and keeps doubling back on itself.

IDEAS: Is there a way out?

WALKER: I don't know if there's a way out. In some ways art can be a way out. Or it can be just another set of traps. I wonder if we're locked into restating certain things because of a tradition that's already been established.

IDEAS: How do you contend with that?

WALKER: By wrestling with the effects of that recycling. How, for example, does it limit a black woman's agency if she can only speak in terms of rape and abuse, over and over again. Where does she insert her own voice? 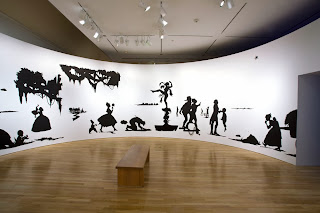 IDEAS: Do you personally do it as an artist?

WALKER: I don't know. It's a construct. One set of parameters has to do with rape and abuse, another set with pride and anger. Both constructs predate me and become my point of entry. Not the actual experience of being a black woman, but the experience of those constructs.

IDEAS: Is there a precise moment when you got into silhouettes?

WALKER: A huge moment at the Rhode Island School of Design. I'd been looking at a lot of early American art, thinking about self-definition, what it was for a group to define itself against, say, Europe. Silhouettes kept coming up, but didn't make sense until I brought in thoughts about black self-image, the performance of blackness, gender, masking, passing, pretending, physiognomy, and race sciences...

WALKER: Just the profile, and the idea of gleaning so much information from a detail. It also came from the direction of art making, and the recognition that I wasn't going to make paintings.

IDEAS: Your father, Larry Walker, is a well-known abstract painter, so you just couldn't go that way?

So I demoted myself to making a kind of art that enjoyed second-class status, and lets you effectively thumb your nose at whatever thinks it is first class, including those large oil paintings I was trying to make.

IDEAS: I think of your art as touching on politics and pornography.

WALKER: It refers to and is very ambivalent about both.

IDEAS: A third reference point is outsider art. Your training makes you anything but an outsider. But you're completely self-taught when it comes to your medium.

WALKER: What I relate to in outsider art is the urgency to tell the tale, to reveal something no one else is seeing. Compared to high or fine art, you have an earnestness or passion that will not be tempered by the right thing to do, the right move to make.

IDEAS: Don't your silhouettes refer, as well, to black face and minstrel shows?

WALKER: There's a funny place in the minstrel show parallel to the work of an artist, particularly in black performers blackening up and relating to that constructed image of constructed blackness. To whom is it entertaining? Where is this fuzzy location where pride and humiliation come together?

IDEAS: Look at that piece [a silhouette of a black woman holding up a reptilian child.] You don't have to worry about that being easily understood.

WALKER: That's an assumption! Keep in mind they're images, not men, boys, or girls. We're looking at pictures that respond to other pictures, rather than the actual thing.

IDEAS: OK. But what would you say if I asked you tell me about it?

WALKER: I'd say I already told you about it by making it. I was referring to certain images, the gator-babe, the black child who's forgotten.

What would you say to the tape recorder if you had to describe it?

IDEAS: I'd say your work tempts people to "read" it for meanings.

WALKER: I hope it also slips them up.

Harvey Blume is a writer based in Cambridge.