Each day he went to bed exhausted at seven P.M., to wake up after one A.M. quite refreshed, and at once resume work. At nine A.M. he would stop, then move into a whole new day's work, finishing at six when he prepared a meal. When he became ill and was running a fever, he still chopped wood, stoked the stove, and did part of his writing standing up, with his back pressed against the hot tiles of the stove "in lieu of mustard plasters." His single goal, even should it cost him his life, was to finish the history of Russia's enslavement.
D.M. Thomas, "Alexander Solzhenitsyn: A Century in his Life"

HB: Why did you write a biography of Alexander Solzhenitsyn?

DMT: Well, I was invited to.

Read more >
Posted by Harvey Blume at 6:52 PM No comments:

Jonathan Spence is author of numerous works about China and the West. His latest is "The Chan's Great Continent" (1998). 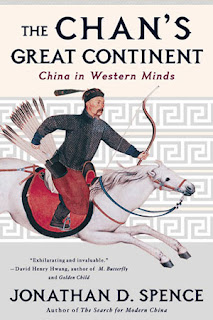 From the idea that there was one central key to Chinese language, it was a logical step to try to find a key to the whole society of China, to see if there was some single system that explained the country, just as knowledge of other systems explained the physical universe.
Jonathan Spence, "The Chan's Great Continent"

HB: Would you say that for Westerners China was the unWest?

Read more >
Posted by Harvey Blume at 6:53 PM No comments: